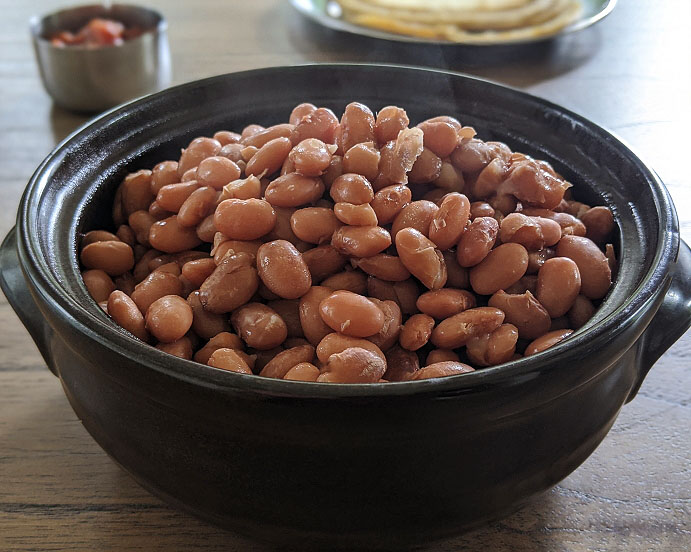 One of the best things that I have been doing in the last year is freezing cooked (dried) beans. Earlier I used to cook extra portions that I would refrigerate for later use. Sadly, such beans were good for max 2 weeks after which they would spoil. I was not into buying canned beans and since pressure cooker was a handy appliance in my kitchen, I did not think much about it. But enter Instant Pot and I found making beans ( and a big batch) much easier. Then came the question of storage and suddenly the "AAHA" moment of freezing them.  Its been many months, but I still wonder why I never thought of doing it this long. Oh well. If you ask me, I think Kidney Beans ( especially the ones you find in Indian groceries - large, dark red ones and/or older beans ) are the toughest beans to cook. When Instant Pot Kidney Beans proved to be a breeze, I knew the other beans were only going to be a child's play! And it was. 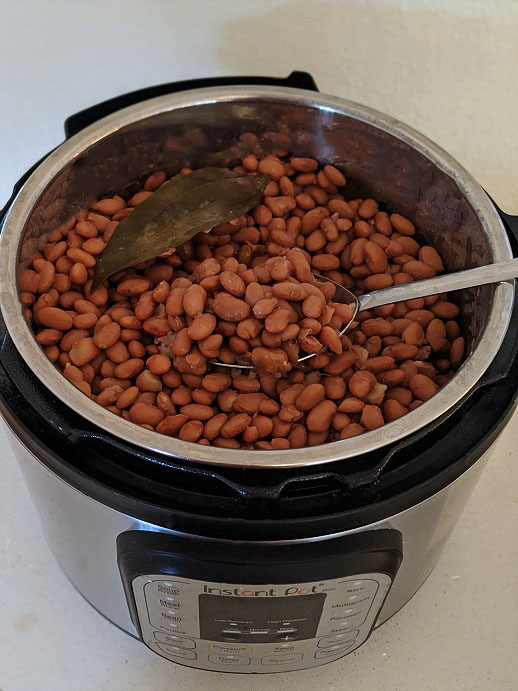 These Pinto beans are pretty quick to put together when you soak the beans taking only 15 minutes of hands-off time. Even if did not have the time, just an additional 5-6 minutes is all it takes to get dinner ready. I own an Instant Pot Duo 6QT and it makes a huge batch of beans that I can freeze for later use. I soak 2 lbs of beans overnight and cook them the next day in the Instant Pot.  In less than 45 minutes of "I-forgot-I-am-cooking-beans" later, you have about 12 cups of cooked beans all ready at your disposal. If that's not a win for a smart cook, I dunno what is! 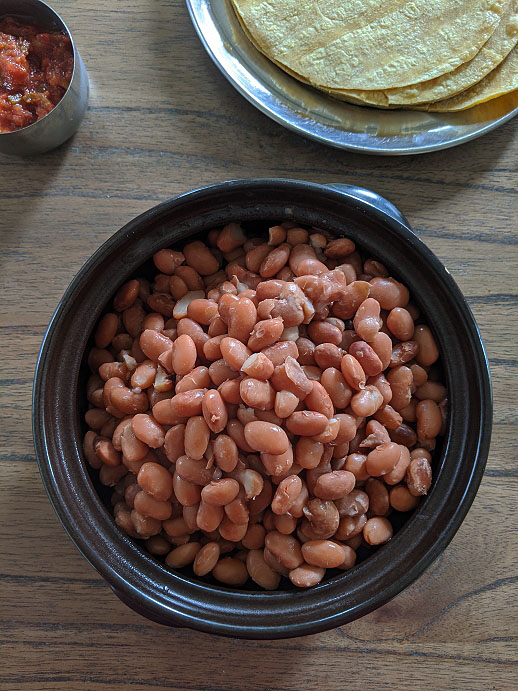 This is such a money and time saver. And it doesn't hurt that there are so many dishes that you can whip up at short notice - dips, quesadillas, beans and rice, curries, burgers, sandwiches......and so on. Since I like to use my beans in so many different ways, I only use basic seasoning. But you can definitely season it with specific flavors depending on what you are going to use it for.
Ingredients

Tips
1. Pinto Beans: For this pictorial I have doubled the quantity. Since I prefer making a huge batch, I am using 2lbs (about 4 cups) of beans that I will soak overnight and cook the next day.
Method
1. I soak my beans overnight with apple cider vinegar. I am not very strict with the amount ( I eyeball it) but its approximately 1 tsp for 1lb of beans I find this addition of acidic medium helps a lot with digestion. 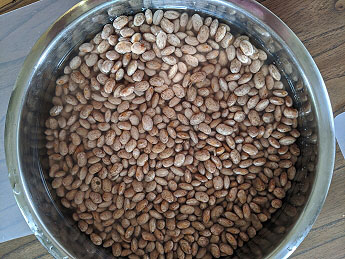 2. Next day, drain and wash the beans well in cold water. Load it in the Instant pot along with seasoning of your choice. I use only bay leaves and salt. Fill it with enough water to cover the beans. Make sure its within the max (2/3 full) line. Since I am using already soaked beans, there is not much expansion while cooking hence I can afford to use even 2 lbs of beans like I have done in this post.

Note: My 6Qt Instant pot allows me to cook 2 lbs of beans that has been soaked. With water the qty comes just below the max 2/3 full line. 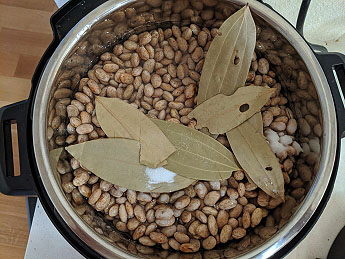 3. Make sure to set  Venting Knob to the Sealing Position before starting. 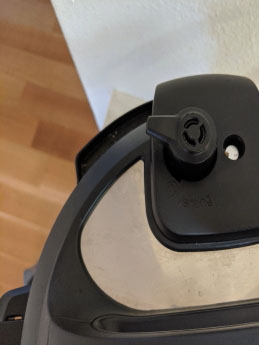 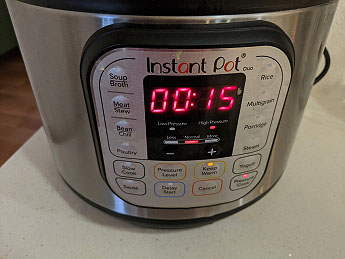 5. Once done, let the pressure release naturally (15 minutes). If there is still some pressure, release it manually. Open and press the beans to check for doneness. You should be able to press it down without much pressure. 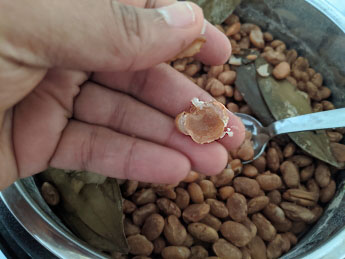 6. This timing gives me perfectly cooked beans that retains the shape. Cook more if you prefer a mushy consistency. Depending on various brands and age of the beans, you might need to adjust the timing. If it still has a bite, pressure cook for another 5 minutes. Next time, you can set the cooking time to 20 minutes in that case. I have cooked 3 different brands to to-date and all of them cooked perfectly in 15 minutes for me with natural pressure release. 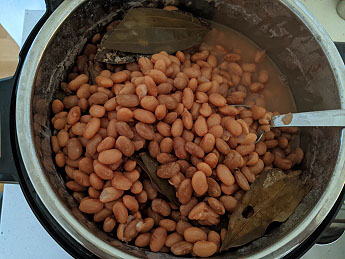 7. Proceed with your recipe with the beans. I usually make a big batch to last me through the month and hence I chill them before freezing. Check my "How to freeze cooked dried beans for this process. 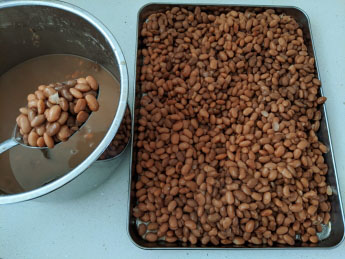 If you are freezing, you can drain and save the broth for other recipes like soups, stews, cooking rice etc. Oh, one more thing - remove the bay leaves after cooking :) 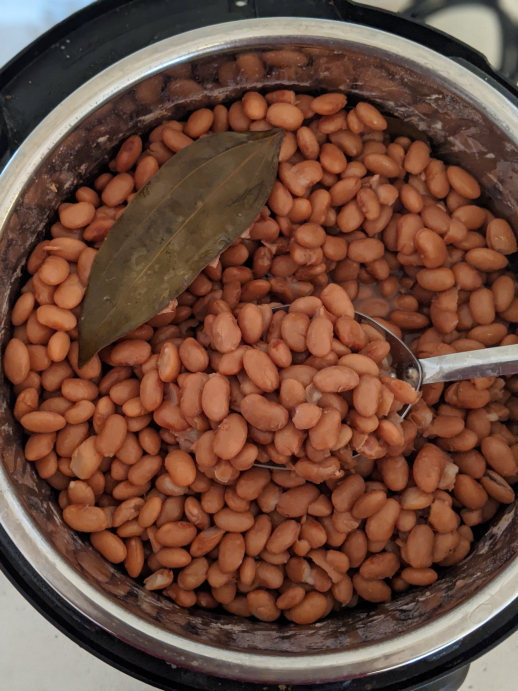 I have been cooking with standard (non-electric) pressure cooker since the fifties. Ouch! But really, that was with my mother in the kitchen. Just trying to peal off some years, here. LOL I received an INSTANT POT 6QT DUO last year from my kids. Totally unsolicited, but they are trying to pull me kicking and screaming out of the Jurassic period. My old Presto still does a great job for mashed potatoes and other veges, but most of the time veges are microwaved, even par-cooked for stir frying. Well, down to business: you are spot on as my ancestors across the pond would say when it comes to pre-soaking the beans before pressure cooking. It is amazing how various times are given by other sites. My main go to is frijoles refritos that I formally pre-soaked (I am of the salt added school), drained and pressure cooked at 15 lbs for 7 min, drained again and continued cooking in a pot with seasonings and just enough water to make a minimally mashed and firm paste for tacos and burritos. My attempts to duplicate my older methods has one glitch: I have to put the Instant pot on low slow cooker to steam off excess liquid. Despite that I love the freedom from waiting to get up to pressure, adjusting the flame for pressure (jiggle), setting the timer, and hope that one hears it when it goes off ( I know, carry it with you) , and most of all not fearing the fail save plug popping. It happened! What a mess that was to clean up. Stay safe! What a time we are living through, Eh!

I tried this and it was really helpful. Can i do the Black beans too the same way??

The cooking time is different. I find around 8 minutes to be sufficient. I have a post coming up soon. --DK

Love your explicit instructions on both kidney beans and pintos for the InstaPot. It really works! Soft and creamy every time. Would you happen to have yet another set for Black Chickpeas? They never seem to soften up, even though I have followed the instructions on most sites to a "T" Thanks!

I have for regular Chickpeas coming up, Havent tried yet with Black Chickpeas. Will try and update that as soon as I can get my hands on them. -- Nilima