The Peshwari Naan is a famous sibling to another well known - Kashmiri Naan. And rightfully so, both are quite sweetish in taste comparing to other type of Naans. The Peshwari Naan - which is actually Peshawari Naan gets its name from Peshawar which is in Pakistan where it has its origin. If you are lover of sweet nothings, then this Naan is for you.

You can make it as Sweet or as mild as desired.It has nice a stuffing made of all aromatic spices and nuts. Usually the stuffing is just chopped and stuffed while making the Naans. To make my job easier, I have instead ground up the stuffing where I don't have to worry about the stuffing falling apart while rolling the Naans. Technically speaking this Naan tastes good on its own, or else you could go for some Ghee/butter.

Sift the floor in a large bowl and add all the ingredients except the stuffing together. 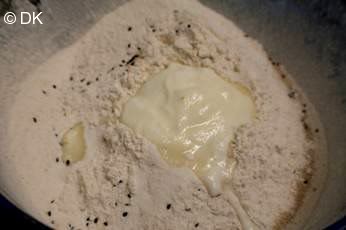 Mix the dough and add lukewarm water until it comes together as a soft dough. Knead well.Place it back in the bowl, cover and keep it in a warm place until double in size. 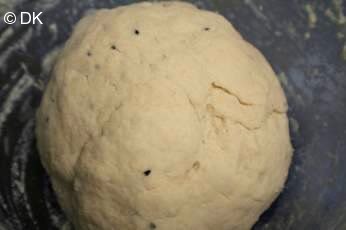 Once doubled, knead well again and let it rise once again. 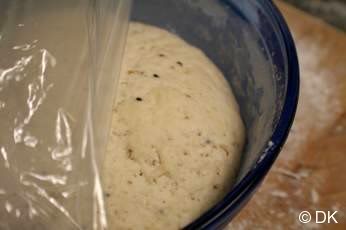 Meanwhile take the stuffing ingredients and place in processor. 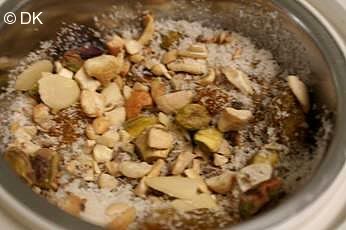 Grind into a coarse mixture. 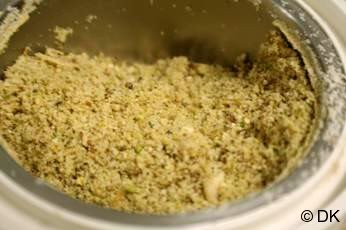 Knead the dough again and with some flour , roll it out into a small circle and put the stuffing inside. 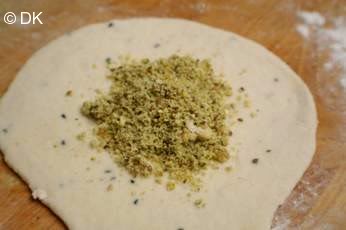 Bring the edges together, press it down 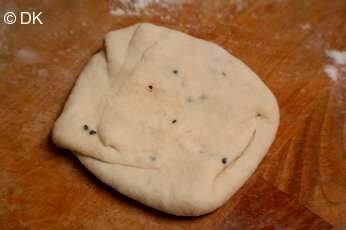 and roll it again into a tear drop shape. 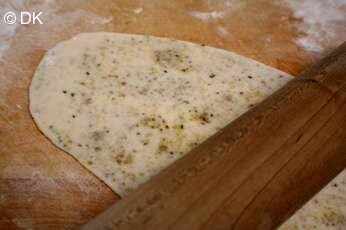 Heat the broiler and place the Naan topped it with some butter.

Once brown spots start appearing, remove and turn and repeat the process for the other side. Serve hot with some Ghee garnished with some toasted nuts, raisins and few sprigs of cilantro.

In lahore one new restaurant should offer which kind of naan. , bread s through tandoor ćrownlahore@Gmail. Com

Hi I am the Manager of a restaurant called Svaada and we make Naans all the time but we are having some problems with the Naans that have filling like the Peshwari for example it is too long to make when the customers place their orders. Any suggestions on how i can solve this problem. Much Thanks Reseena

By Pass the peshawari naan, please | Rubber Slippers In Italy on Feb 10, 2013

[...] to fire up the oven! I wanted to try making these after seeing them on Chef In You. Italy has flatbreads too – focaccia, piadina, crescia sfogliata, among other things – [...]

Hey dear...the naan looks absolutely lovely!! I tried making these yesterday but mine din turn out that good:((. Please let me know how you preheat ur broiler, do you preheat for like 10-15min, or do you preheat the oven to 500-550F & then turn to broiler option. Also, let me know where you place the rack, middle or close to the broil. Guess u can help. Thanks.

Every oven is different. For this recipe, I made the naans in my oven which I preheated to my max 500 setting. Once the oven reached the full heat, I place my naan for few minutes (keep an eye on it) and turned it. If your Naan was hard, then it means that - either you kept it longer in the oven, or your Oven temp was too hot for the hot. In that case, either reduce the cooking time for the naan or reduce the Oven temp. I havent yet made naans using my broiler setting.--DK

DK, I've always put off trying naan at home, because I thought it was impossible to do well. Your pictures convinced me otherwise and so I gave it a shot last night. As it turned out, my toddler got sleepy by the time first rise was done, so I decided to make him a quick one on a tava. My husband and I watched speechless as it browned and rose beautifully and even puffed up like a phulka! Very light too. Thanks! I think I will be making these often. One thing though - is the 1 tbsp kalonji a typo? It was way too many for us. I wonder if it should've been 1 tsp.

Hi Nivedita - Thanks for your feedback. I am glad you liked it. I have a naan for making it on stove top too :http://chefinyou.com/2009/03/coriander-cilantro-naan-your-one-stop-shop-for-making-this-indian-flatbread-at-home/. And yes - you are right! 1 tbsp of onion seeds is def. a typo. Thanks for pointing it out to me. I have updated the post with the correction :)

I'm late for the party from the looks of it but I received some kalonji in a care package and wondered what to do with them....now I know! What a delicious idea with a lot of helpful photos. I'll definitely be trying this at home.

thanks for the information d.k. i appreciate ur sincere response...

Naan, yum with fruits and nuts. I love naan but I find that baking them or broiling them makes them crunchy but not soft.Yours look amazing.

New to me..Looks too good!

I've never made my own naan, though it's on my list of kitchen musts. Beautiful recipe!

Love this naan with nut filling..

Lovely DK,I have heard of this,I thought its just naan.Recipe is first time for me.You are going great guns.Lovely recipe

Bread flour is not wheat flour. It has high gluten content which enables an excellent softeness and elasticity to the dough. In case u dont find Bread flour - use All purpose flour. For more information about Bread flour refer this link-->
http://www.ochef.com/97.htm

Thank you for your kind comments. I have updated the ingredients list with other name for kalonji. Have also linked so that you know how they look and are known by various other names. Hope that helps

This looks so wow DK, you sure are good at this, have to try soon. thanks for sharing

All ur bread items are too good & very nice expalnation.
Good presentation!!!!!!!!!!!! d.k
will clear me what is kalonji?

Looks delicious DK. I never had sweet nan. tell me one thing what is that bread flour?? is that equal to normal wheat aata??

This is the best series of breads ever... All of my favorites. & I need to try all of these out..

Suprise Weekend Bonanza waiting for you.

Oh DK!!what delicious looking flatbreads this week.Makes me wish I was your neighbour:)..easy step by step instructions makes me want to try them all..

This naan is completely new for me...delicious n tempting one..

my dhivi you have really had me guessing!!!..that looks so lovely...:))

wow wonderfull will try this sure