Has it ever happened to you that you bought a spice mix for a special dish and then it was left in the Pantry since you couldnt make use of it again? One such spice mix would be Pav bhaji Masala. I used to buy it when I made Pav bhaji and then it used to be unnoticed until the next time I made the same. Hence I started trying to incorporate ways and means to include it in any other dish and this is another one in which it works really well. This following is my variation of the famous Aloo Paratha

Add the flours and salt together and stir to mix. 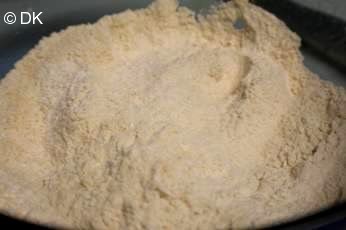 Add water until it comes together into a soft dough. Set aside while you make the filling. 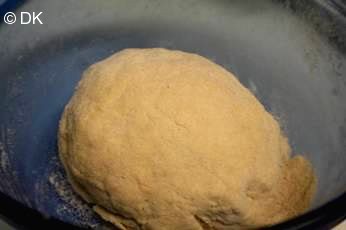 Add rest of the ingredients for the filling and mash it together until there are no lumps.Make small balls out of the mix. 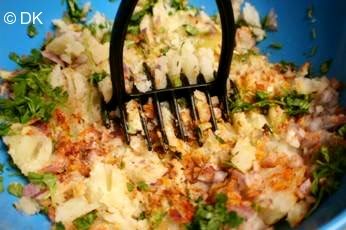 Now make round balls of the dough and roll it into a circle using a rolling pin, a little bigger than the filling balls. 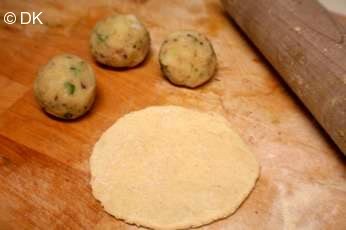 Now place the filling in the center of the dough. 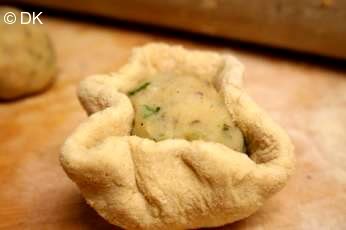 Bring the edges together on the top of the filling. 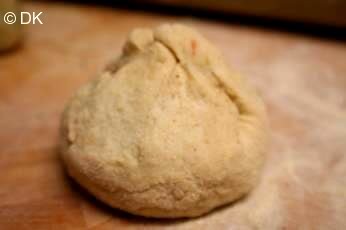 Now press the top of the filling with the palm of your hand until the dough gets depressed and forms into a flatbread. 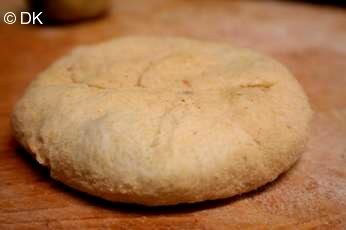 Now slightly roll into a circle. Usually the Parathas are little thicker and not as thin as roti’s. Use some flour to dust the flatbread in order to help the dough from sticking to the dough. refer pic. 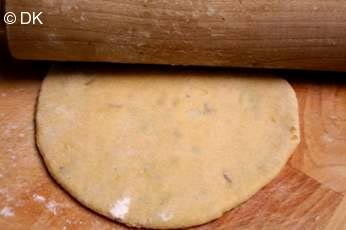 Heat a non stick pan and add Ghee/oil and place the Parathas. Roast them for 1-2min in med-high flame. 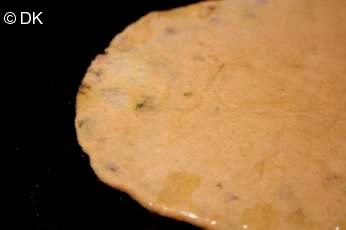 Turn them when some brown spots start appearing on the surface of the flatbread. Do the same for the rest.It is best with pickle / Raita and some butter/ghee :) I also take it with some onion slices. 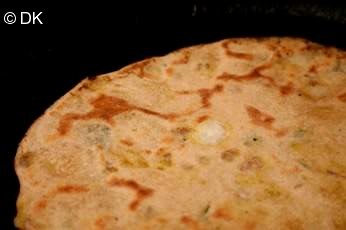 I'm new to cooking (by myself that is). So far, my aloo parathas have never been so tasty. But after I followed your recipe, they came out amazingly tasty. My husband loved it!! Thank you so much for this recipe. I will definitely try it again.

followed the procedure given and yummy parathas ready :)

Hi DK One question, after adding salt to the stuffing, how to avoid it to become mushy / watery? Every time I add salt and mix the stuffing, it becomes too soft and unmanageable. Thanks!

Looks delicious. One question though, how soft should the dough be? If the dough is not loose enough, when i put it on tava and take it out, the paratha becomes very crispy, more like stuffed khakhra. Can you help me there? Thanks

This is more on the thought of spice mixes than the actual recipe...does anyone know where I can order Indian spice blends/ingredients (of good quality) online? There is NO WHERE in my area to buy locally. I have asked around ( I work in a large, very ethnically diverse hospital) but they all say the same thing...they do their grocery shopping in NYC (2 hours away and if you don't speak the language, good luck reading labels!)

Loved the aloo parathas. I followed your recipes to the book and it came out amazingly well. They were so delicious that my husband loved it too and asked me to make it again!! Thank you for this recipe DK. :)

Thanks a lottttttttttttttt fro posting this recipe. I tried this recipe yesterday. The aloo parthas are very yummy. My husband liked it a lot. Today i am gonna make it again.

Something which I could never get the desired results..theres always something missing with my aloo parathas...yours look delicious..;-)

An All time fav breakfast

Excellent presentation DK :) I was a novice at making these and had a hard time making it when I was new to it. But now learnt the tricks of the trade :)

Delicious aloo parathas, Dhivi! I love the use of pav bhaji masala. Great to know since I have the same problem with forgetting about it! :)

what a lovely way to tempt:)

ehmmm..aloo paratha is so yummy!

Lovely parathas.. Adding pav bhaji masala is a nice idea. Every bite of the paratha would remind us of Pav bhaji.. Yummy!!

Lovely and my favourite.But not yet tried,as mine always ends with one side missing or torn and whatever mishaps possible.

Wow the twist in recipe(pavbbhaji masala)is indeed rocking
I sometimes use pavbhaji masala to make softbuns (laadi pav)in onion potato tomato gravy...very popular in sindhis as seyal maani or seyal pao and trust me it changes the whole flavor of the dish..it tastes really spicy!
And i am sure u wud have relished all these spicy parathas ,without leaving a morsel for us;-(

Aloo paratha all time fav with pickle and curd. loved the step by step instructins

Wow that was yummy paratha and very nice presentation.

Would like to invite you for a coffee at My blog
Pls join me :)