Regular readers of this blog would surely by now know my love for breads. Its amazing how breads can be made with almost anything and everything! With Pumpkins everywhere, it is inevitable that I would try a bread made with some. I had made some home-made Pumpkin Puree and the first thing I did was to use some for this bread.

Taste Test The variety for making Pumpkin breads are myriad and this time I used a recipe from Simply Recipes. I adapted the recipe to adjust the availability of the ingredients and also to make it low fat and tad bit healthier. I used some Roasted Pumpkin Seeds (plain salt seasoning) instead of the walnuts. I think 1/2 cup of pumpkin seeds turned out to be a bit too much for this bread. It results in mild crunch and then sort of becomes chewy. I ended up chewing the seeds more than the bread itself!!!!! Hence I think it would be a great idea to use either v few pumpkin seeds if at all or use Pecans/walnuts instead. I think Pumpkin seeds don't always work in baked goods. One user had the same complaint when using Alton Brown's recipe (see the one with the heading "excellent!.. all except the pumpkin seeds.. maybe not toasted enough?"). I know mine were toasted v well - they were v crunchy on their own - but somehow just didn't work that well with the bread. Everyone else in that thread also seemed to not use the seeds for some reason or the other. But the bread by itself was fantastic and slightly on the sweeter side. Its bit chewy with beautiful texture thanks to the addition of wheat bran. Use of Egg whites instead of whole eggs - enhances nutrition without adding any fat. It also contributes to the moistness of the bread along with healthy Canola Oil. The spices add a wonderful aroma and flavor to the bread. I would definitely make this bread again, but of course without the pumpkin seeds and use walnuts/pecans instead :) **UPDATE** Two readers of mine told me exactly what could have gone wrong with the pumpkin seeds. Bergamot and Chana (via e-mail) told me the seeds could not have worked cos they were unhulled. Only then, that it stuck me that I was using fresh pumpkin seeds (with the cover intact which makes it chewy) which are not hulled. The seeds which you normally get from the shops are hulled and in green color which will work v well for this recipe. Just remember not to use fresh ones. They are excellent as snacks but don't work well in baked goods. Thanks to them for pointing this out to me :)
Ingredients
Method
1. Preheat Oven to 350F Oven. Sift the flour, salt, sugar and baking soda together. Then add the wheat bran.

5. Add half of the nuts to the mixture.

7. Top it off with remaining nuts.

8. Bake for about an hour or until a skewer inserted in the center of the loaf comes out clean.

Let it sit for few minutes and then turn it out into a wire rack to cool.

Slice it and enjoy!

I just found you online and the spiced pumpkin bread was the first thing I tried. I used whole eggs instead of just the whites so I reduced the oil to 1/3 cup, I used a combination of roasted pumpkin seeds and pecan pieces.  It was beautiful to look and delicious to eat.  The first loaf disappeared so quickly I made a second loaf.  I accidently used 1 tspn of each of the spices instead of 1/2 tspn each.  We liked it even better spicier!  Sorry, no photo...the second loaf is gone already! 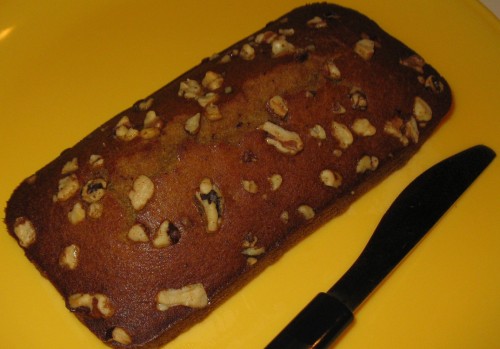 it turned out really good....the only changed i made was used walnut instand of pumkin seeds for garnishing.

This was the first time I've made a bread of this type, but it was super easy! I used pecans instead of pumpkin seeds, because that's what I had on hand. The bread was crazy delicious, moist, and tender. Thanks so much for sharing!

[...] Spiced Pumpkin Bread: The bread by itself was fantastic and slightly on the sweeter side. Its bit chewy with beautiful texture thanks to the addition of wheat bran. Use of Egg whites instead of whole eggs – enhances nutrition without adding any fat. It also contributes to the moistness of the bread along with healthy Canola Oil. The spices add a wonderful aroma and flavor to the bread. From Chef In You. [...]

[...] Spiced Pumpkin Bread: The bread by itself was fantastic and slightly on the sweeter side. Its bit chewy with beautiful texture thanks to the addition of wheat bran. Use of Egg whites instead of whole eggs – enhances nutrition without adding any fat. It also contributes to the moistness of the bread along with healthy Canola Oil. The spices add a wonderful aroma and flavor to the bread. From Chef In You. [...]

I was wondering if cracked wheat can be used instead of the wheat bran.

hello, I tried this receipe on an impulse since i had all things handy. Only changes were that I used whole wheat flour + maida and 2 whole eggs and almonds. I made the puree by presure cooking. I made it in my 3-in-1 MW for about 45 mins. But still the centre was all moist. Though it had nice aroma,it was undercooked. Could you pl tell me why it so happend???

dear Shilpa - did you do the skewer test? To know if its baked completely, you had to insert a skewer/toothpick in the center of the bread. If it comes out clean with nothing sticking to it, you know its done. Probably for your oven type, the 45 minutes weren't enough. We all have few differences in how the oven temps work which is why this method of using a toothpick to check is always mentioned in all baking recipes.

[...] also made pumpkin spice bread for the party, following this recipe and it turned out pretty well. I was expecting a sweeter bread, so might add in some more sugar or [...]

Best pumpkin bread ever. I'm a college student and everyone in our hall was coming into the shared kitchen and saying how good it smelled. (I substituted apple sauce for the oil and used whole wheat flour.)

Hi Leslie, I am glad to get your feedback! I am glad it turned out well. yes I agree - the aroma is amazing! Love the applesauce and wheat flour variation :) -- DK

By 10 Simple Ways to Green Your Halloween | Crunchy Domestic Goddess on Oct 20, 2009

[...] into a solar-powered jack-o-lantern and use all of the pumpkin. You can make roasted pumpkin seeds, pumpkin bread, pumpkin spice cookies or pumpkin black bean soup, and compost your pumpkin when you are done with [...]

[...] Whole Wheat Pumpkin Muffins with Pepitas (adapted from this recipe by chef in you ) [...]

Awesome it looks.Never ever tried pepitas in bread.Love all your bread recipe DK

Wow, this looks great! I'll have to try this recipe.

This looks incredible. The photo is stunning. I just want t like my screen.

This bread sounds dense, delicious and fragrant. I cannot think of a better way to start of these chilly fall days.

That looks awesome with the pumpkin seeds on top! This kind of thing is the best part of fall :)

SUch a delicious and healthy bread, looks prefect..Happy diwali wishes to u and ur family DK!

Another delicious bread DK. Looks delicious. Will try with may be walnuts. Wish you and your family a very happy Diwali.

The pumpkin bread looks nice. I generally remove the outer covering of the pumpkin seeds and use the kernel. Maybe that would help!!

You are right. It completely slipped my mind. Have updated my post. Thanks :)