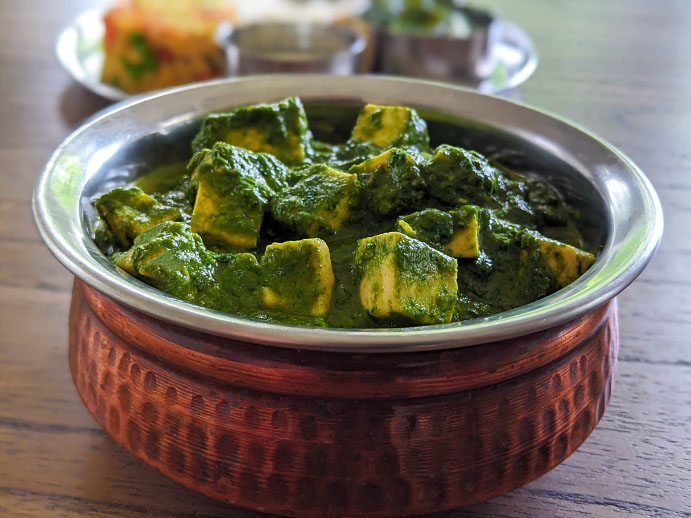 I cannot say enough good things about OPOS Cooking. I love it so much that I even wrote a 7 ways OPOS Cooking improved my life post. In so many years of cooking and blogging, I have slowly tried to refine my cooking process to be more efficient and quick. Then came in the knowledge of cooking food optimally that retains color/nutrition. This was followed by my need to follow "Green Living" wherein I had a pressing need to minimize wastage. With each passing year, I felt the need to instill another discipline. That's when OPOS came into my picture. It was everything I was doing - but with far less time, thought and ease.  Everyday cooking was a cinch. What took 30-45 minutes before, now took 10-15minutes. 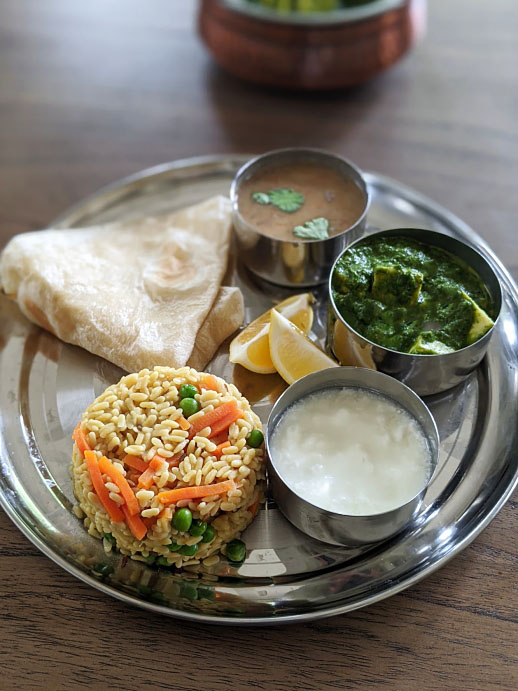 This thali for instance was all done around 12 mins. Three cookers loaded with dal, saag paneer and pulao (made using RightRice, that's not rice at all - more about that later) while I rolled few chapathis from (big batch) frozen homemade dough on the side. This thali in less than 15 minutes with freshly cooked wholesome food would not have been possible if not for OPOS.  Anyway, this post is about one of the components of that thali - Palak/Saag Paneer.  The term Saag  in Hindi is usually used to describe any green gravy that's made using leafy greens. You can use either one primary green ex. spinach or a mix of multiple greens. So Saag Paneer literally means a greens gravy with paneer. The term Palak means Spinach. So Palak Paneer is a dish made using spinach and paneer. Do you see why these two terms are used interchangeably? 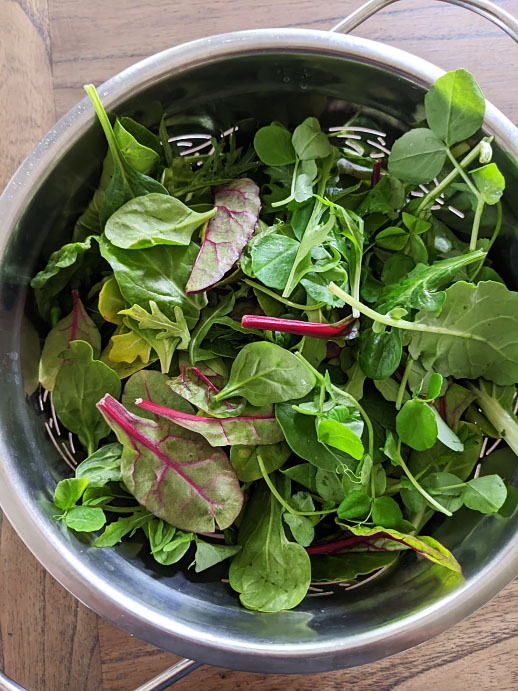 This dish is pretty easy but OPOS makes it even easier and quicker. All it takes is one pot! For today's post I am using an assortment of greens like organic sweet pea leaves, baby spinach, baby bok choy, baby kale, mizuna, tatsoi, baby red chard, baby green swiss chard and baby arugula! I always have this noble intention of trying to consume greens more often but most often it remains just that - a good thought! Well, using such power mixes are my way of partially making up for that :) The choice of the greens is totally upto you. You can use the same technique to use just one green like spinach or an assorted mix of greens of your choosing.
Ingredients
Tips
1. Greens: Please refer to my para just above the ingredients for the mix of greens I have used in the recipe.

2. Cumin powder: The kind of spices is upto you. You can use other spices like garam masala, kasoori methi, red chilli powder etc additionally or individually depending on your preference. My only suggestion is to use minimal spices in order to let the greens shine in the dish. We are looking to supplement and/or enhance the dish not distract it.
Method
1. Take a standardized 2L pressure cooker and add oil to it. If trying out the first time around, I would suggest adding about 2 tbsp water along with the oil. Give it a good mix until combined. 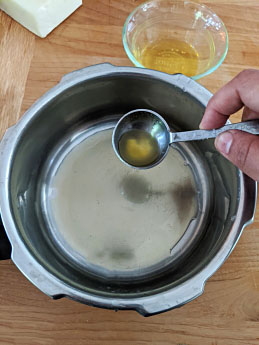 2. Next starts layering. Place the onions and tomatoes side by side. If you are adding the chillies, add them now.

Tips: If you don't care for the onion/tomato, skip this layer and go to the next step. 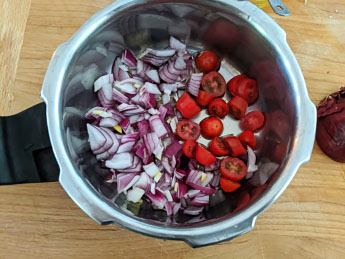 3. Add the mixed greens (or just spinach/palak) and press it down. It might look like a lot, but it will dwindle down and no, don't worry about your cooker. It can take it :) 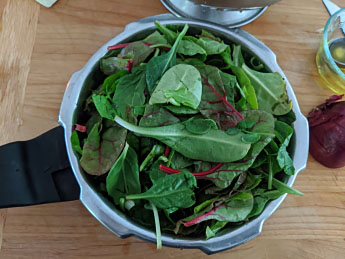 4. Add the spices at this point along with the ginger garlic paste.

Tips:  Be miserly with the salt and spices. A little goes a long way especially the salt since greens are generally saltier by themselves. 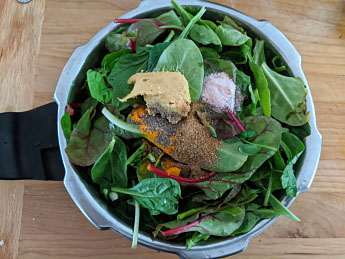 5. Next add the big blocks of paneer. I do not cube them now since I personally find it easier to remove them later while making the greens puree.

Variation 1: Instead of adding spices and paneer separately, you can combine the cubed paneer along with the spices and then add them on top.

Variation 2: This method especially is best when you use paneer right out of the fridge when it is hard. If using fresh paneer, simply add them towards the end of the cooking instead of now. 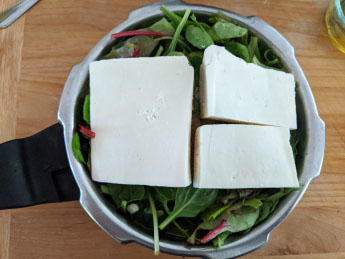 6. Cook for 2 whistles / about 5- minutes. If you don't get a whistle even after 6 minutes, simply switch off the PC. The gasket might be the culprit leaking away steam around the sides. 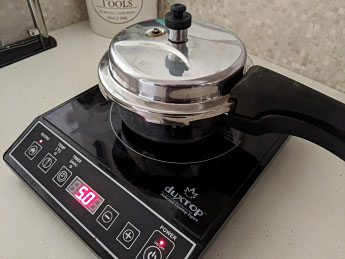 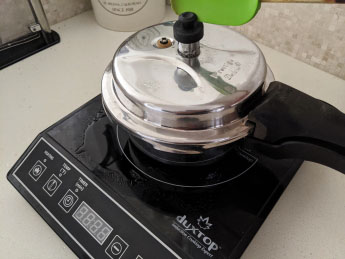 8. This is how it looks upon opening. 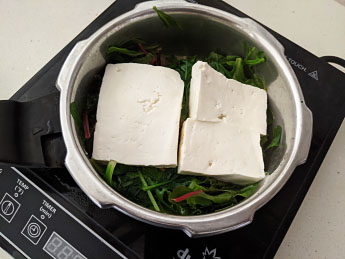 9. Remove the paneer and set aside. You can chop it into bite sized pieces at this point. Spinach/greens releases a lot of water and it makes it easier in a way to prevent burning. 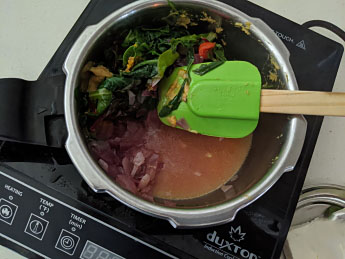 10. Puree the greens to the consistency you like. Some prefer coarse while others love a smooth, silky and creamy gravy. 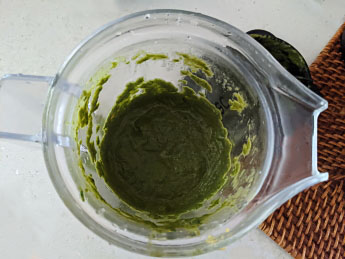 11. Add back the chopped paneer to the gravy 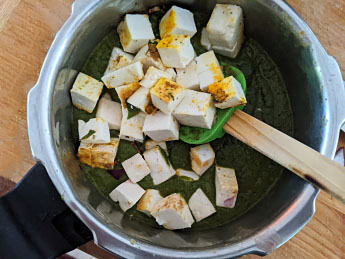 12. and mix until combined. Add in few tbsp of cream or milk for a richer creamier taste. I like to add in some lemon juice since it helps in the absorption of iron from the greens. 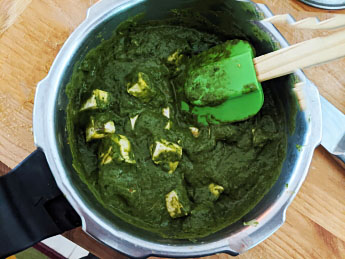 Enjoy these warm. Goes well with both pulao/naan/roti. 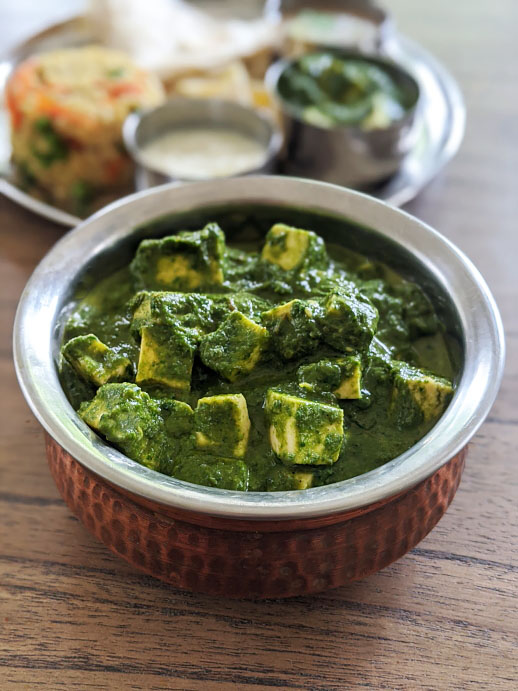 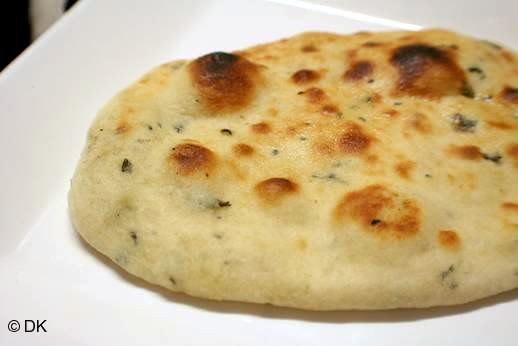 Hi DK, I’m reaching out from RightRice because we were so excited to see that you included RightRice in your OPOS Palak Paneer recipe. We would love to get in contact with you to thank you for being a fan! Please send us an email to eat@rightrice.com - we hope to hear from you soon! Best, Akemi